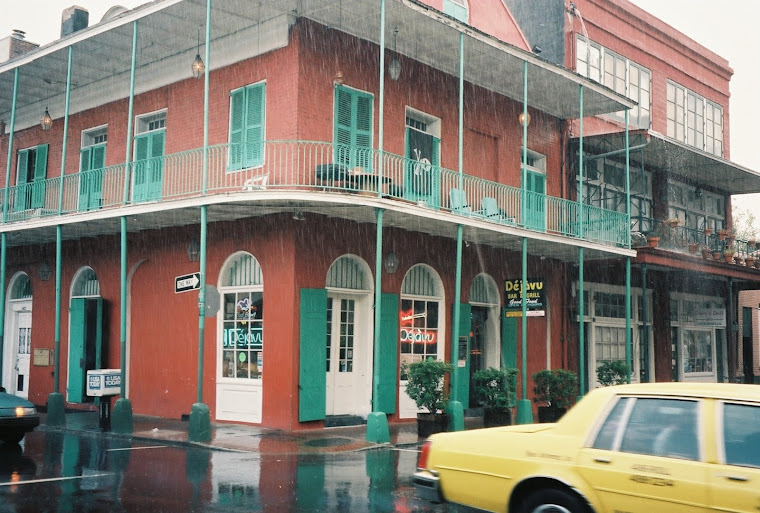 MOIRA CRONE, Author of THE NOT YET has answered my New Orleans Questionnaire. Read her thoughtful and thought-provoking answers here:

New Orleans is--- light and dark, both.

Favorite building: Too many to choose.

Favorite piece of writing on New Orleans:  The book, Degas in New Orleans, also love The Awakening.   Rising Tide is brilliant, as well.

Most apt New Orleans nickname: I don’t know of any.  “THE BIG EASY” and “THE CITY THAT CARE FORGOT” seem to miss the point.  There is much more to it.
Those are phrases from people who don’t live in the city, who see it from the outside (as a place where they can get drunk, play, not adhere to the imbalanced work/play ratio the rest of America has.)  Americans from other places view New Orleans as a place to be a slob.

Favorite New Orleans personality/character:  I would have said Uncle Lionel Batiste, but he has just died.
I love Kermit Ruffins.  He is always cheerful and casual and has a fantastic band.
Dave Brinks is a very amazing human being:  poet, poetry-scene creator (The Goldmine Saloon 17 Poets Series) impresario, publisher, historian, and supporter of the arts and artists from all over.   He owns a bar in the French Quarter, which is the heart of the city’s poetry life.  He is the definition of a generous man, sui generis, New Orleans original.

Favorite New Orleans thing not mentioned here:  The few times it has snowed (twice, in December) ---the snow on the ginger plants and palm trees is completely surreal.  Sazeracs at the Carousel Bar on a cold day in December.

Who should be the mayor of New Orleans?  Landrieu is good, but he has not got a grip on the police culture.  I don’t know who else.

How can the city lower its murder rate?  A start: Police that are well paid, and forced to be on the street and visible, as they were in the 90’s, when the crime rate fell profoundly. The police did not like the rigors of being on the streets all the time during Morial’s terms in the 1990’s.  His police chief was Pennington.  He was from Washington D.C., and had “zero tolerance” policies such as those in NYC at the time.  Crime went down.  Now we have reverted to policies of the pre-Morial era.
The way it is now, the police actually make more money during high crime eras, because they have more “details,” which are private opportunities to work as security guards off hours. This is a primary income stream for police, again.  This practice is so ingrained, that Landrieu cannot seem to break it—or, since he has support in the police community, he has no motivation to break it. The Department of Justice has taken over the police department because of their corruption, and they insist that these “details,” be stopped— police themselves assign this extra work within their departments, and give favors, etc. to each other with these “bonuses.”  Corruption, bribery, and laxity are the results.
Also, there is a need for more mentors and help for young men so they don’t get into drug dealing.  More and more schools and training programs to give young men more options.  Drugs should be made legal, also. The profit in drug dealing has to be taken out.
I have sat on three juries in the last two years.  Drug related crimes in two cases, and one murder trial among very young men. The killer attacked a drug dealer mostly out of bravado and fear. No one on these juries, from any social class, or race, believed drugs laws should remain as they are today.  Too much incarceration, too many arrests for minor crimes, too many incentives in the system to sell drugs and become part of that sub culture.

Why I live in New Orleans:  I live in New Orleans because people there are naturally creative.  Everyone you meet, practically, has an art that they do.  The contractor has a band, the eye doctor is a fine art photographer, the rich matron is a plein-air painter, the district attorney is a jazz musician, the bartender writes mysteries, the saloon owner is a poet, the boy stocking the groceries is a rapper. There is no stigma around being creative, around having an “art,” or a “re”creative activity, such as being in a Krewe, masking, being in parades, etc.  People are encouraged to completely discard their personas for festivals. The South in general in America is very Protestant, I mean the Bible Belt: straight-laced.  I grew up on the Middle South, and being an artist was associated with being un-balanced, etc. crazy, deviant. This may be changing but there was never such a view in New Orleans. You can be an amateur, no problem with that, either.  Having more than one art is also encouraged.
There is also, in New Orleans, a deeply African acceptance of the fact of death, and the insistence that we celebrate life, which is the theme of the second line dance after funerals.  This understanding that every moment requires a new dance, and the embrace of, and insistence on, joy and something new---improvisation--- in the face of decay and death, are the basics in New Orleans.

The thing I like least about New Orleans:  The no-way-out feeling among some in poverty, the thoroughly ingrained despair some people feel.  The violence associated with this. The African American population is an extremely traumatized group of people who sometimes do not have hope.  They can descend into a place of absolute nihilism because of past history:  this is true of anyone, of any group, of course, but there is a large undercurrent of this in the black community in New Orleans.   Slavery was a horrible assault on human nature and its scars are still everywhere. The effects of serious trauma on a whole group, passed down through generations, involve many social problems ---because the family memory, the scars of your own parents and grandparents, the extremely degrading and profoundly cruel treatment in the past, are things that have not been addressed, not really exposed, and worked through.  Anger and paranoia flare up among black people in situations that white people don’t even perceive, because they are not scarred in the same way.  There is a lot of misunderstanding about this.
White people need to see it, not just claim that black people are unstable or fearful or violent for no reason, and black people need to understand, more, the roots of the anger, self-hatred, and fear that are part of their worldview at times.  The violence of course perpetuates all these other traumas---it also must stop.
Another thing I don’t like about New Orleans is the attitude tourists have about it and the way they exhibit that attitude—that the city is just there for their amusement, that it is some kind of big joke of a place, a silly place, not serious, a place to drink and piss.

What people don’t know about New Orleans: It is often, vis-à-vis the rest of America, not backward---as everyone always says---but a step ahead.  I mean by this, sometimes things that happen in the rest of the nation, culturally, and politically, happen in New Orleans and Louisiana first, not last.  Of course this is true in music---jazz--- but it is also true in politics, and in food ways.  There is a progressive streak in New Orleans that is definitely not Southern.
For example, the whole attempt to outlaw Jim Crow, the first civil disobedience in that long fight, took place in New Orleans, and resulted in the Plessy vs. Ferguson decision, which of course set back Civil Rights for generations.  But that was the first attempt, the first time segregation was challenged in a deliberate act of planned defiance---to force a decision on a law.  This happened in New Orleans.
Many things that eventually become quintessentially American, things that changed America’s view of itself, were New Orleanian first.